We are thrilled to share that Peloton has made its second update to its Android App in less than 3 weeks! After recently adding the ability to sync with a heart rate monitor, Peloton Android app users can now check out their achievements in past workouts thanks to the new updates.

This new Peloton Android App update allows users to see details such as: 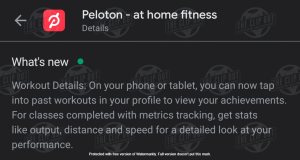 This fabulous addition was made with minimal fanfare. However, eagle-eyed Android users noticed the new feature during a routine update of their app.

Android App – What you used to see.

After years of letting the Android app fall to the wayside, this is Peloton’s second update in recent weeks. Many users are very excited to see that Peloton finally made these helpful updates for their Android users. Does this mean we can expect more focus on Android in the months ahead? Historically, Peloton users have leaned heavily towards Apple. With the recent influx of new users due to Covid-19, Peloton’s 90-day free trial, and their global growth one has to wonder if they’ve seen a significant uptick in Android users.