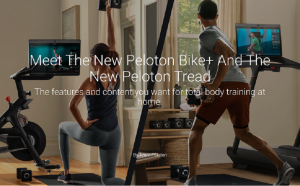 Well, it’s official!! Peloton went live with all of the new Bike+ and Tread details.    Oh did you WATCH that video???  I got CHILLS.

Early this morning, Bloomberg posted an article with much of the same information we had heard below, but they also had some other tidbits we think you will be excited about!

We’re still discovering details about the new bike. The addition of a monitor that swivels was essentially confirmation that bike-based boot camps are coming. Well, now we know who the first bike-boot instructors will be!

You read that right. Jess Sims is adding the bike to her repertoire and bringing boot camps with her.

Here’s what we’re hearing about the new Tread. While haven’t confirmed official specs, we have confirmed that the new Tread will have a significantly smaller footprint. Super important for apartment-dwellers or those looking to fit one more piece of fitness equipment into an already cramped space. The monitor size will be reduced to 23.5 inches. This is identical to the monitor size for the new bike so having identical monitors probably saves them on manufacturing costs. The new Tread will no longer utilize slats. However, users can still expect a similar feel as Peloton has added a cushioning device to maintain the bounce that current Tread-owners are used to. We do not anticipate the new Tread being available for purchase as soon as the new bike will be. Look for sales to begin around the first of the year.

Here’s the latest – How will the bike interact with Apple products??  Well, for one if you have an Apple watch, you can simply tap the display to pair and begin displaying your heart rate.  Second, it will automatically update your rings!  WOW!

Rumors are starting to leak about Peloton’s new bike and we have the scoop! This is what we’re hearing about what to expect.

The new premium bike will feature a larger monitor clocking in at 23.5 inches. For comparison’s sake, the current bike monitor is 21.5 inches. But bigger isn’t the only change with the screen. The new monitor will also swivel! This all but confirms that bike boot camps are coming.

Obviously music has always been an integral part of the Peloton experience and they are really upping the ante with a front-facing soundbar plus a subwoofer.

Another fascinating feature of the new bike is its ability to automatically change the resistance based on what the instructor calls out.

We haven’t been able to confirm the price but we’re being told to expect an official announcement to come sometime around Peloton’s next quarterly earnings report.

Be sure and stay tuned as more rumors about Peloton’s new bike start to drop.

With so many new bikes having been sold in the last three months, we have to wonder if there might be a trade-in program in the works.