When does freedom of speech become a political statement?

When does speaking your truth become offensive?

These are some questions that Peloton is struggling with this week.

Jenn Sherman gave a shout-out to one of her most loyal riders, Tom Jenkins.  This was a celebration for his 1000th ride and Tom and Jenn share a long history of loving football, discussing football, and teasing each other openly about their favorite teams.

Jenn Sherman is well-known for her Sunday football rides – she loves the game. And she always walks through what is happening with the NFL in a way that even a non-sports fan can understand and appreciate.

But, back to the ride on Sunday…

Video courtesy of Tonia Jenkins. Used with permission.
Some were offended by this statement.  So much so, that they reached out to Peloton CEO John Foley personally to complain. 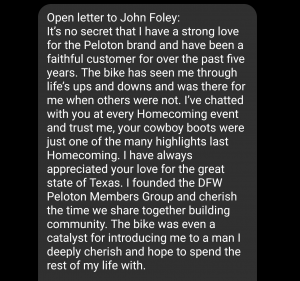 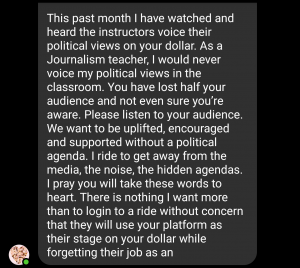 John Foley was kind enough to respond and the ride was then removed.

To Jenn’s fans, it’s clear this was about a special bond between Big Tom and Jenn and a special shoutout  – making the best out of what I think we CAN all agree on has been a strange and trying year.  Including the person that Jenn was shouting out.  Tom and his wife Tonia both feel sad the ride was removed, especially since it was such a special milestone and felt it was clear the statement was about their mutual love of football.

Also, Jenn’s supporters have pointed out that the person who reached out to John Foley didn’t actually take the ride. 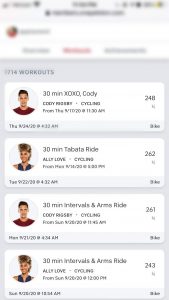 Then there is the fact that she is using a hashtag to express a political opinion of her own while asking for politics to be removed from Peloton. 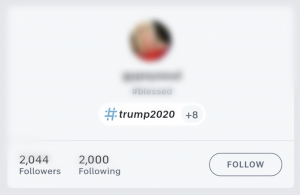 On the other hand, the statement was made on a ride, not on a rider’s profile.  So, it’s not an apples to apples comparison.

Personally, I understand Peloton’s decision to remove the ride.  It wasn’t worth the potential misunderstanding.  However, I also understand those who are sad it was removed.  And, I can’t help but question: if the statement were made about a different party, would the complainer have still complained?

This year has been the most divisive in a very long time and I believe we are all on edge.  Make sure you are registered to vote and you use your voice in November.